We are up and away shortly after sunrise which in Spain in mid September is not until about eight o clock. Window after window is decked with large yellow flags. In fact there is yellow everywhere. We are curious but stumped.

On our way out of town we are treated to a glorious morning sky and the path is easy to follow. 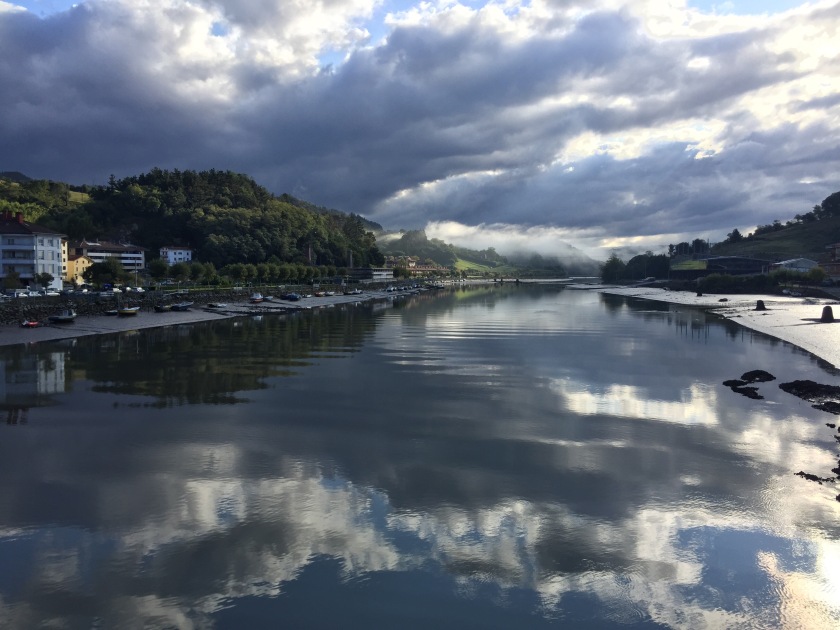 We also solve the riddle of the yellow flags. As we watch two long yellow rowing boats beneath us the on the river a man stops and gives us a local history lesson.

The boats, called traineras, were originally used for sardine and anchovy fishing.

The fisherman who returned first to the shore to sell his catch received the highest price. Since His his crew earned a percentage of this price it was to everyone’s advantage to hustle back to the shore.

Over time this developed into a competition between boats and eventually towns.

Since 1859 races have been held the first two Sundays in September along a three mile course in front of the beach in San Sebastián.

Modern boats are made of carbon fiber and carry a crew of 13.  Each town is identified by a different color. Orio is yellow and they had just won the Regatta for the 31st time.  Hence the celebratory flags. 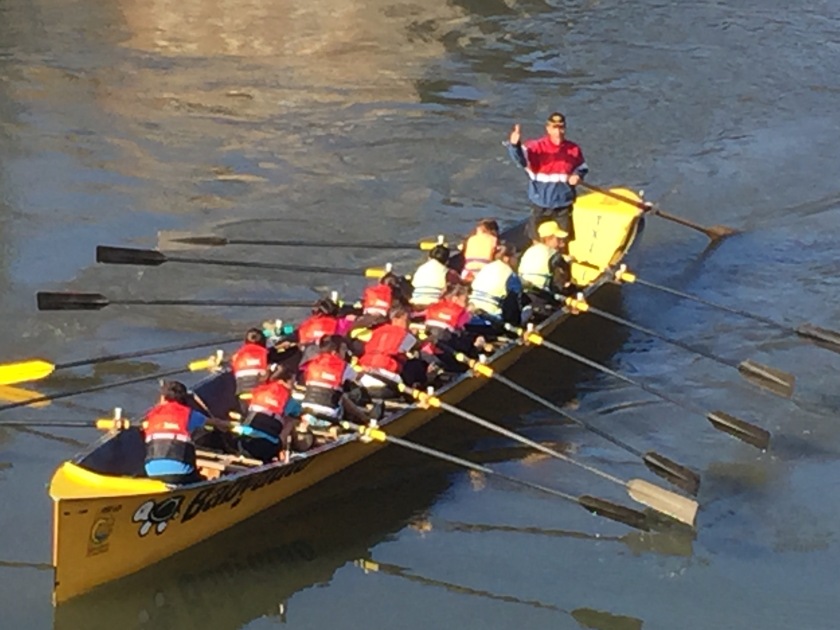 Our walk takes us through vineyards, along the beach swarming with surfers who file down a steep path from the campground to the sea with their boards on their heads. We can barely make it with a backpack. I can’t imagine a long board. We assume they get a ride back up! 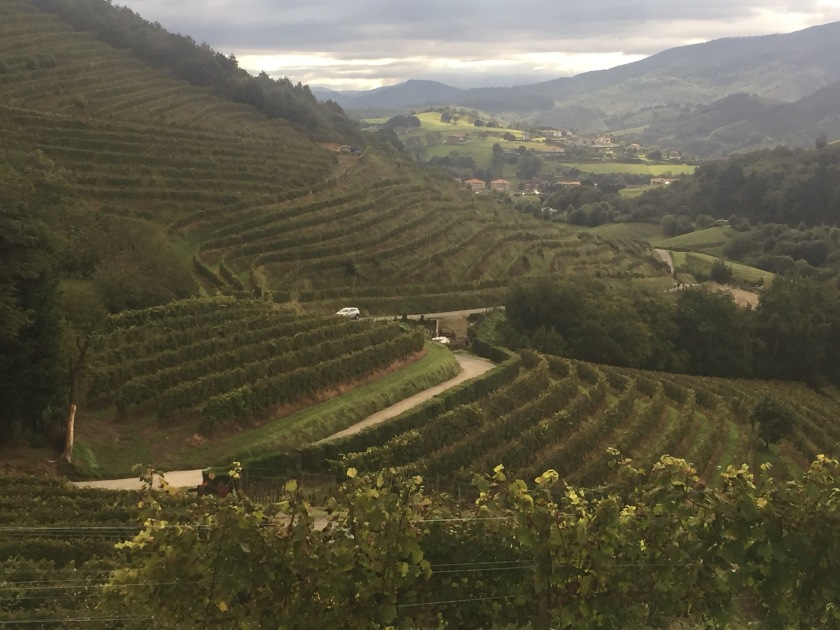 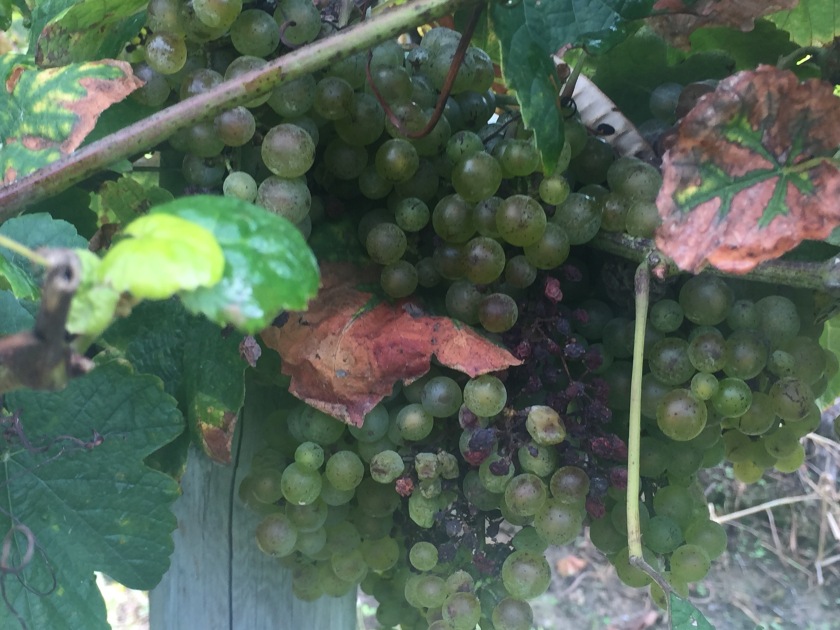 (Surfers come down from the top of the hill on the right.)

Stop for a chat and photo op with two men from Barcelona and Brazil who are here to surf but have done the camino. 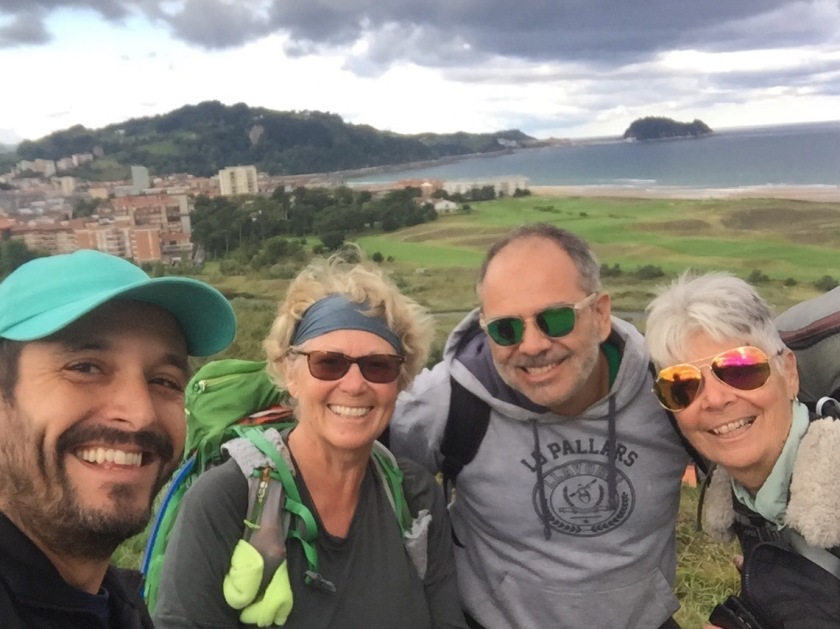 Spend a pleasant afternoon walking our final six miles to Getaria above the sea on a pedestrian boardwalk. People of all ages are happily walking, talking, running and enjoying the day. 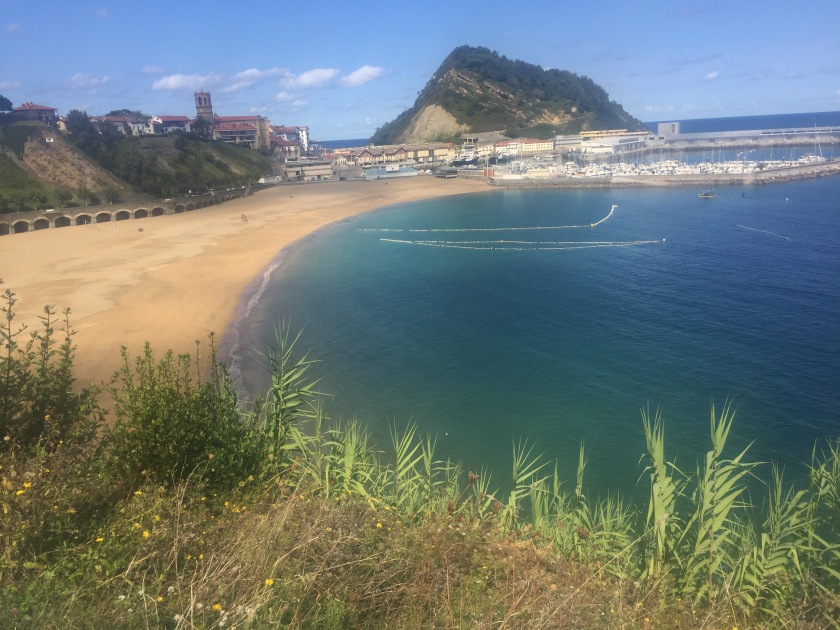 Juan Sebastián Elcano was the Captain of the Nao Victoria, the only one of Magellan’s ships to successfully circumnavigate the globe. He did it first!

The other, son of a fisherman and a seamstress, went on to become one of the most famous haut couturiers in the world- Cristobal Balenciaga. His museum, opened in 2011, is stunning as are his clothes. Not exactly camino wear but a feast for the eyes          and looking doesn’t add weight to the bag.

A dinner of, what else, local  wine  and fresh sardines and it was off to bed to dream glamorous dreams and hope our washing dries by morning!