This morning we are on our way to the Cathedral of Santiago in the city of Santiago de Compostela.

So Saint James of the field of the stars, which is entirely appropriate. Tradition says that after Saint James was beheaded  by King Herod in 44 a.d., his body was brought to Spain in a stone boat guided by angels.

He remained buried until the mid 800’s when a shepherd, guided by stars, discovered his remains.

Almost immediately a shrine to hold his bones was erected on the spot. There have been several different churches on the site  but pilgrims have been walking to santiago cathedtal since the 9th century.

It is Sunday and we are soon to join them.

We must have been having, to quote B, “a little anxiety” about getting “to the church on time”. 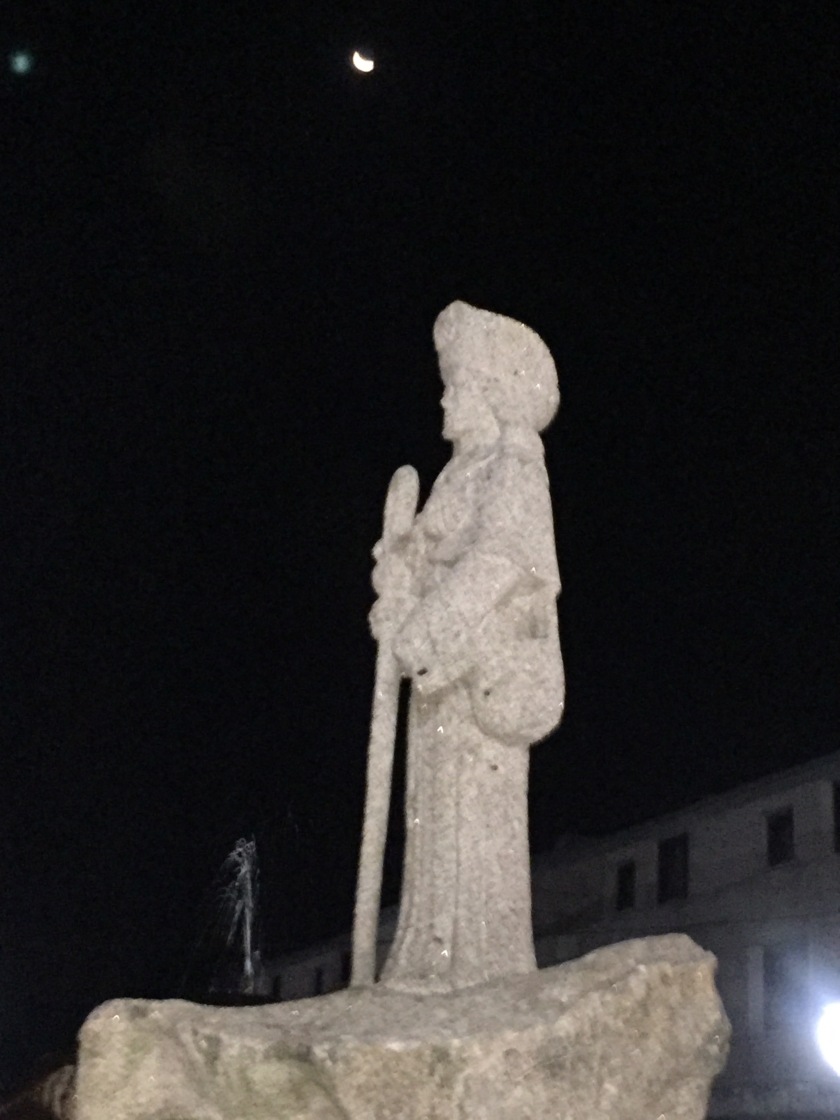 No going back. There are two “fire flies ” ahead of us so we follow them for an hour.

It is a gorgeous starry morning and I am in heaven. I have been itching to see stars this entire trip and they have been seriously lacking. This morning they are in their full glory.

I spot Orion and I know this will be a good day.

When I was growing up we spent many a winter’s night outside admiring Orion.

In the year before my father died I was frequently the night dog walker. Night after night when I returned he would ask, “Is Orion still up there?” “Yes” I would reply and then he would say ” Good everything  will be ok. I’m off to bed. ”

Fast forward to September 11, 2001 and we are living in the middle of New York City.

On a good night I could look out of our 11th floor window and if  I tried really hard, I could count 13 stars.

The night of 9/11 there were far fewer cars moving and the city was very dark.

I looked out the window and there was Orion. All would be well I thought and went to bed.

After my father died, I became the night dog  walker for my mother. I’d come in and she’d say, “Tell me the name of that Irish constellation again.” You mean O’Ryan.  Yep that’s the one. I’d laugh and we’d both go to bed.

Whenever  I see Orion/O’Ryan I am reminded of all of my family and friends who have “crossed to safety “.

I like to think they are up there with Orion looking down. I know all is well and all will be well.

The “fireflies “have stopped. We catch up to them. Two men.  They ask if we know where we are going. We laugh. “We were following you,” we say.

So here we are. Four people. Old People.  They are even older than we. We are less than five miles from the end of our walk  and we don’t know where we are or which way to go.

Are we lost? No. We are somewhere and Orion is up in the sky. All will be well .

We fall into step together. We get “found”.B walks with one man, I with the other. After an hour, we switch partners s and continue to talk.

We walk along and have most most wonderful conversations. Like B and me, they met on the Camino . One from Oregon one from California. Each walking alone. Drawn together by their mutual agreement  they were too old to sleep in bunk beds and that they were old enough to deserve a good nights sleep in a hotel.

One man is gay and very liberal. The other is very conservative – a husband, father, grandfather, great grandfather. One a devout Catholic. The other an agnostic.

They both agreed walking together had changed the way they thought about so many things.

We arrived at the Monte  de Gozo, the hill of joy. This is the last hill to climb on the camino.  It really is all downhill from here.

There is a large sculpture commemorating Pope John Paul’s visit to Santiago in 1989. We stopped and watched the sun come up. 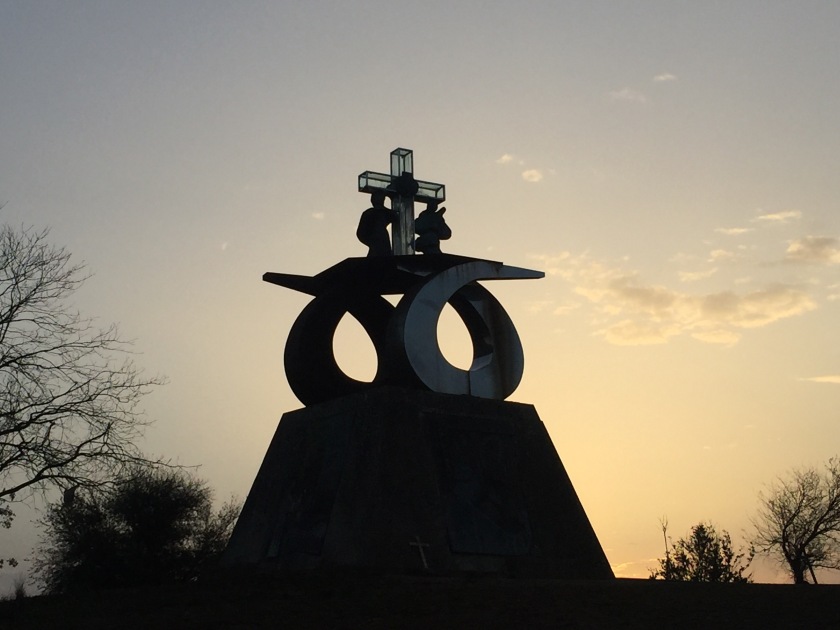 Also on this hill is the ultimate pilgrim alberge. 500 beds!!

Sadly most pilgrims miss another sculpture three hundred meters off the path. Most are in such a hurry to get to santiago that they zip right on by.

I’m not sure which is better the sculpture or the view but it is worth the extra steps.

Santiago -Saint James -is both a pilgrim and the object of his own pilgrimage. He stands in his glory with his scallop shell, hat on his head , staff in hand, decorated by grateful walkers. Beside him is his pilgrim, hat in hand.

George and Chris climbed up. They stood beside their fellow pilgrims and looked down on the three spires barely visible in the mist.

And I bet you didn’t know this about Orion.

The constellation Orion can be seen everywhere in the world. Every ancient civilization has had a name and an appreciation for this group of stars.

Years ago early man carved its likeness on a mammoth bone. More than 30,000 years later someone found the bone in a cave in West Germany.

Ancient Asians referred to Orion as The Perfect Shepherd  of the Sky. My mother was sure he was Irish.  Scientists predict he will be around for another million years.

One thing I knew, as B and our wonderful new friends also knew. We weren’t lost. We were found in more ways than one. We were in Santiago and we would all get to church on time. Orion was still in the sky and all would be well.